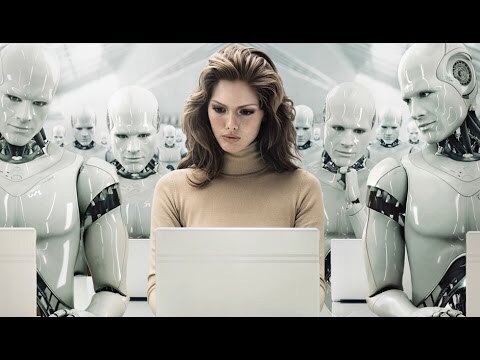 Nowadays, we are surrounded by Android devices and chat bots. Smart electronics and internet of things are essential parts of our life. So it is not a surprise that some of us live like robots - mechanically efficient, but with no awareness. Are you afraid of raise of the machines? Come this Sunday at 12:00 o'clock to discuss a new high-tech topic "Robots and Artificial Intelligence"!

Say your name,
If you had a robot, what would you like it to do?

A joke from the video:

2. Spend one minute writing down all of the different words you associate with the word “robot”

1. Could AI become more intelligent than its creator?
2. Given what little we know about our own minds, can we expect to intentionally create artificial consciousness?
3. If a robot can do only what it has been programmed to do, then can you say that a robot is able to think? What does it mean to be able to think?
4. If people were writing stories about robots before they really existed, who has more imagination – the people who created the idea of robots or the people who actually created the robots?
5. Think about your five senses (sight, hearing, touch, taste and smell). What key concepts would you program, into a robot so it could identify a specific object (perhaps an apple or a song) by all five attributes?